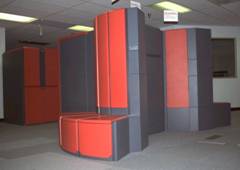 This year (2007) is the 20th anniversary of OSC and the 17th anniversary of SI. Computing technology has come a long way in the past 2 decades, and the principle behind this project is to highlight the differences between supercomputing capabilities in 1990 versus today. As an example, during the 1st SI, OSC had a Cray Y-MP supercomputer (which was at the time the most powerful one in the world) with the following specifications:

By comparison, a standard off the shelf desktop computer today has the following specifications:

In addition to advances in hardware, there have been significant advances in software. In 1990 the SI teams used Fortran or Pascal to create their programs, which after running for quite some time on the Cray generated output text files with the results. These text files were then input into a specialized hardware system that generated the individual frames for an animation. Because of limitations in the memory of that system, animations were limited to ~10 seconds in length and there was little ability to make modifications once the animation was rendered. By comparison, modern applications such as MATLAB integrate programming languages, data handling and visualization all together in one package that allows users to make changes on the fly.

The project team will select several projects from the early days of SI to recreate and improve upon. MATLAB will be used to recreate the programs to generate the appropriate data as well produce the final animation videos. Depending upon the interests of the team members, there will be several possible ways to improve upon the original projects, such as:

Archives of many of the historical SI projects can be found at:
http://www.osc.edu/education/si/past_si/

One project that was done several years in a row involved simulating the growth of crystals in a super-saturated solution. (http://www.osc.edu/education/si/projects/crystal/index.html)

An example frame produced previously on a supercomputer for this project is below on the left, whereas a frame recently produced using MATLAB is on the right. As an exercise, the original Fortran code was translated into MATLAB code. The MATLAB code generated this image in a matter of seconds on a typical laptop computer. 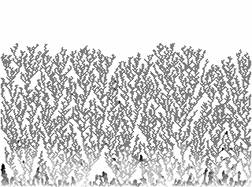 Another “retro” project involved the simulation of the spread of an epidemic across the state. (http://www.osc.edu/education/si/projects/epidemic/index.html).
Again, on the left is an original animation frame, while on the right is a modern interpretation of the project using MATLAB. The MATLAB code to create this animation takes up less than 50 lines. 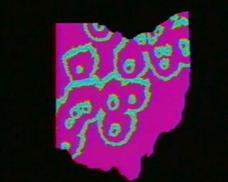