Klaus Schulten, Ph.D., the Swanlund Professor of Physics at the University of Illinois at Urbana-Champaign, delivered the 2014 Pitzer Lecture in Theoretical Chemistry at 4 p.m., Monday, Oct. 27, in Room 2015 of McPherson Laboratory, 140 W. 18th Ave., on the main campus of The Ohio State University.

Schulten’s address was titled, “The Photosynthetic Membrane of Purple Bacteria – A Clockwork of Proteins and Processes.” The Pitzer Lecture in Theoretical Chemistry is organized and supported by the Ohio Supercomputer Center (OSC) and the Ohio State department of chemistry. Professor Susan Olesik, Ph.D. and chairperson of the Ohio State department of chemistry, delivered the welcome, and a reception followed the lecture in Room 2136 of Newman and Wolfrom Laboratory.

Klaus Schulten is the leader in the field of computational biophysics, having devoted more than 40 years to establishing the physical mechanisms underlying processes and organization in living systems from the atomic to the organism scale. Schulten is a strong proponent of the use of simulations as a “computational microscope,” to augment experimental research, and to lead to discoveries that could not yet be made through experiments. The molecular dynamics and structure analysis programs NAMD and VMD, born and continuously developed in his group, are used today by hundreds of thousands of researchers across the world.

As of 2014, Schulten’s work in biological physics has produced over 640 publications, which have been cited over 72,000 times. Schulten believes strongly in the importance of educating the next generation of scientists, having thus far graduated 80 doctoral students, many working today in distinguished academic positions. He developed new courses and textbooks, and organizes a popular series of hands-on training workshops in which he has trained, in small groups, more than 1,200 young scientists.

Schulten holds a Diplom degree in physics from the University of Muenster, Germany, and a doctorate in chemical physics from Harvard University. He was junior group leader at the Max-Planck-Institut for Biophysical Chemistry from 1974 to 1980, and professor of theoretical physics at the Technical University of Munich from 1980 to 1988. Schulten came to the University of Illinois in 1988, and in 1989 joined the Beckman Institute and founded the Theoretical and Computational Biophysics Group, which operates the NIH Center for Macromolecular Modeling and Bioinformatics. Since 2008, Schulten has served as co-director of the NSF-funded Center for the Physics of Living Cells. 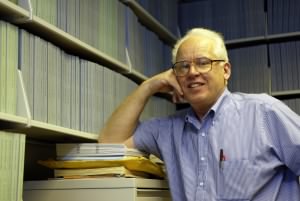 The Pitzer Lecture in Theoretical Chemistry recognizes the many contributions of Russell M. Pitzer, Ph.D., professor emeritus of the department of chemistry at Ohio State.

Pitzer received his bachelor’s degree in chemistry from the California Institute of Technology in 1959 and his master’s degree and doctorate in chemical physics from Harvard University in 1961 and 1963, respectively. He also completed his post-doctoral fellowship at the Massachusetts Institute of Technology (MIT) in 1963. Pitzer began his teaching career at Caltech that same year, before moving to Ohio State in 1968, where he later served as chairman of the department of chemistry.

In 1987, Pitzer co-founded and served as acting associate director of OSC. He also became a trustee of Pitzer College in Claremont, Calif., an institution that was founded by his grandfather, Russell K. Pitzer, and was awarded an honorary degree of Doctor of Humane Letters at Pitzer College in 2003.

For more information on the Pitzer Lecture, contact the Ohio State Department of Chemistry and Biochemistry at 614-292-0534 or events@chemistry.ohio-state.edu.