The cornerstone of the Ohio Supercomputer Center's Summer Institute is the projects. The students work together in small teams on diverse and challenging research-level projects. Teams are comprised of a project leader (staff member who conceived and designed the project) and three or four students.

This year's project options are:

OnDemand is OSC's innovative web-based portal for accessing high performance computing services. OnDemand allows clients to use HPC without a big learning curve, lowering the barrier of entry to the world of supercomputing. With OnDemand, OSC users use a web interface to interact with OSC’s supercomputing resources. OnDemand enables users to upload and download files, create, edit, submit, and monitor jobs, run GUI applications, and connect via SSH, all via a web browser, with no client software to install and configure. OnDemand is a special deployment of OSC’s NSF-funded Open OnDemand platform which is currently in use at more than a dozen academic institutions across the US.

In this project the team will work in groups of two students developing web based OnDemand applications to extend OSC OnDemand’s functionality. We will be building apps to provide visibility to users and administrators about disk usage and batch jobs on the clusters. Apps we build will include displaying estimates on when queued jobs will start, statistics on historical usage, and apps to display current and historical disk usage. We will also explore building some simple apps to help users submit batch jobs running simulations or using solvers in a variety of scientific domains. These apps have the potential help OSC users complete their research and may have an impact outside of OSC if deployed at other institutions running OnDemand.

A biological cell is like a city, and it has an internal transportation system that connects different parts of the cell. Nearly all cellular functions rely on the active transport of various cargoes, including proteins and organelles, inside the cell. Microtubules are long, dynamic polymers that serve as highway tracks for intracellular transport (Figure 1). Kinesin and dynein are motor proteins that move cargoes back and forth along microtubules. Disruptions of intracellular transport in nerve cells can cause local swelling of the axon, similar to a traffic jam that we see in real life, leading to nerve cell degeneration in severe situations. These phenomena have been found in many neurodegenerative diseases, such as ALS, Alzheimer’s and Parkinson’s.

In this project, the team will use mathematical models to investigate how intracellular traffic jams arise under abnormal conditions. Students will first be exposed to stochastic processes that are used to describe cargo transport along microtubules and computational methods to simulate these processes. Students will then be asked to investigate how motor-microtubule interaction and cargo-cargo interaction affect cargo transport along microtubules using computational models. Students will finally test hypotheses for focal cargo accumulations motivated by recent experimental studies.  Students involved in this project will have the opportunity to interact with graduate students and postdocs in Professor Chuan Xue’s group who are working on related research problems and may have the opportunity to tour the cell biology lab of Professor Anthony Brown. 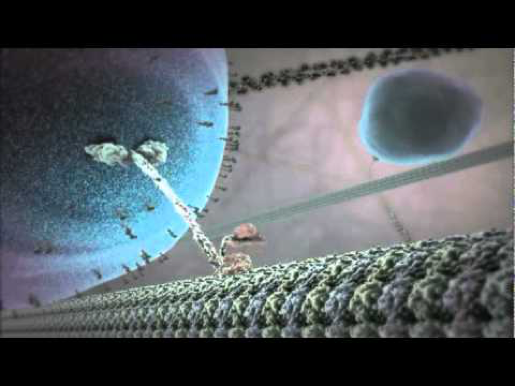 Figure 1: A motor protein transport a big organelle along a microtubule inside a cell. The figure was extracted from the video Inner Life of the Cell created by BioVisions at the Harvard University. A full narrated version of the video is available at YouTube. The clip during 3’40’’ and 3’57’’ illustrates microtubule-based intracellular transport.

One of the biggest mysteries in modern astrophysics is that the overwhelming bulk of matter in the universe is "dark," made up of unknown particles and visible to us only through its gravitational influence. In this project, students will use modern data from the U.S.'s biggest radio telescope - the Karl G. Jansky Very Large Array in New Mexico (pictured) - and the Spitzer Space Telescope to try to prove the existence of dark matter.

The team will begin with observations of the motions gas in galaxies like the Milky Way, recently observed by the Very Large Array. Using these data, they will write python programs to measure how fast the galaxy spins, and then to solve for the mass needed to hold together a galaxy spinning so quickly. After "weighing" galaxies in this way, the students will compare their masses to the amount of light in stars and gas. In this way, students will use modern data to recreate one of the most fundamental astronomical results of the last century using data from some of the best telescopes in the world. 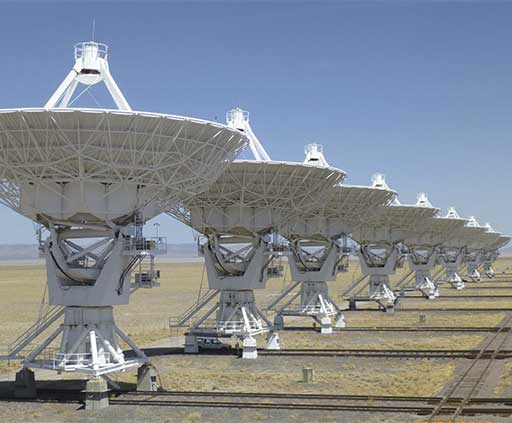 4) The Effects of Visual Attention on Choice

Think of a recent experience you had while buying a t-shirt at the store.  If it was a tough decision, you probably remember comparing the shirt to other options.  You may even remember looking back and forth between the options while you decided which one to buy. This looking behavior is linked to attention, which shifts between the options you’re considering. Research has shown that attention can actually influence which item you will choose, and we have developed mathematical models that can show just how much each person is influenced by attention when making their decisions. Our model says that during the decision process you accumulate evidence in favor of one option or the other until hitting a fixed boundary. When looking at an item you accumulate more evidence for it than you would otherwise.  The stronger this boost in evidence, the more influenced by attention you are in your choices.  What this means is that items that hold your attention longer are more likely to be chosen.

In this project, you will track your own eye movements while you make decisions between snack foods, using an eye tracker. The eye tracker uses infrared light reflected off of the pupil and recorded by a camera to determine where you are looking on the computer screen at each moment in time. Using this data, the choices you made, and your decision times, you will fit the model to your choices to see how well we can explain your behavior and how influenced by attention you are.

This project is designed for both experienced and inexperienced programmers. OSU Psychology & Economics professor Ian Krajbich, who developed the model, and one of his graduate students, will be present to help with running the experiment, any programming questions, fitting the model, and visualizing the results. 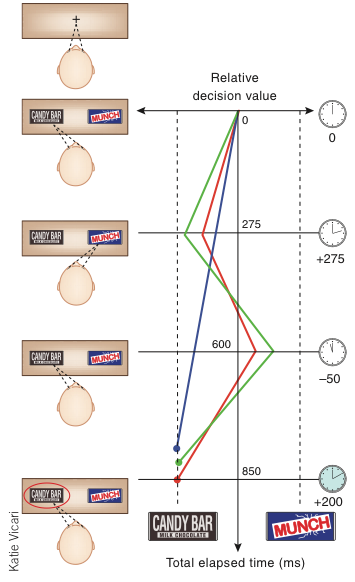